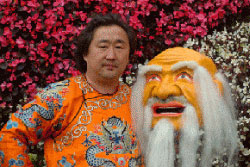 Gankhuyag was born in Ulaanbaatar, Mongolia. Early in his childhood, his parents, who are famous masters of handcrafts in the traditional Mongolian style, have introduced him to fine art of traditional handcrafting, and many great artists have instructed him since then. After finishing secondary school, he started working at the Union of Mongolian artists earning acclaim as a painter and papier-maché artist creating objects for traditional Performing Art troupes in Mongolia. While working at the Union he participated in many international festivals and exhibitions, and got his first international recognition by winning First Prize at the XII World Festival of Youth and Students in Moscow in 1985.

During the years of 1989, 1991 and 1995, he worked for the groups Tumen Ekh and Temujin Munkh as well as for the National Folk, Song and Dance Ensemble of Mongolia. He made the "tsam" dance masks and costume in relation with the production of Tsam masks made from paper-mâché and the choreography of dance rituals (Khuree Tsam). Gankhuyag Natsag has been taught a lot by the venerable Lama Sereeter, Lama Dashzeveg and Lama Danzan. He also played in various mystery plays and cult dances.

Tsam Masks
In 1997, we initiated “Khuree Tsam 108” project. “Khuree Tsam 108” is comprised of a collection of Mongolian traditional masks and costumes with ritual dance performance. After the completion of the project in 2007, we plan to tour around the globe and present “Khuree Tsam 108” performance to celebrate the world peace and revival of this important aspect of ancient Mongolian art and heritage. Moreover, it will be a significant event that will celebrate and cherish ethnic cultures that make our world a better place.

About Tsam masks and their specification
Although, the origin of the Burkhad (Gods) in Tsam dance relates to Eastern culture and religion, it is a very unique and special form of art that reflects ancient Mongolian shamans’ cultural trail and habits. Masks are created with established method by highly specialized artisans.

Damdinchoijoo
He is popularly known as Erleg Nomun Khaan among Mongolians. Damdin Choijoo swore to keep holy Buddha and he is the principle worship of Boghdo Zonhova. He is a very vicious one who wipes out the enemies and distinguishes well from bad and truth from untruth. Then he sends people, who carried out good deeds, to paradise and bad people into underworld. Choijoo has a wife whose name is Zamindi. He is also divided into 3 different forms as follows: exterior Choijoo, inner Choijoo and mysterious Choijoo by his vow, deeds and external image. He has many erlegiin elch (evil messengers) He holds a cord in his hand to use it for tying someone who did bad deeds. Choijoon's bag: Ox head, dark blue body, 2 sharp tasks, 3 shining eyes, burning fire from eyebrows and beard, curled body and very powerful white skull without meat in his right hand a cord in his left hand.

Jamsran
He is popularly known as Dogshin ulaan sakhius. When he dances and acts as if he cuts enemies and pull out their hearts. Wearing duulga in his head, he holds flag with sword and tassels in his hand and wears arrows as well. He also wears Erkhi (like a necklace) which is made of skulls of 50 people around his neck. He swore to defeat and win all of the sinful enemies and make people happy for long. He is also a guard of religion.
The mask of Jamsran Burkhan was made by Puntsag-Osor of Ikh Khuree (present day Ulaanbaatar). This mask is now in Choijin Lama's museum in Ulaanbaatar, Mongolia. It is an outstanding creature in Mongolian history and weights about 40kg.

Durteddagva (Skull)
He is the lord of ukheer (death). He is responsible for not allowing enemies to enter the dance stage. Therefore the border of the dance stage is called border of ukheer. When tsam dancers enter the stage, they have to pass by 2 Durteddagvas (2 guards). There is a legend about Durteddagvans body meat was stolen by thieves. So he is shown as a skeleton. Mongolians have been worshipping Durteddagva to prevent robbery.

Khangarid
Javdar deel that has sleeves like bird wings. Dodig, modig, earrings which have ruujin ornaments. He dances with shake in his mouth, 5 different coloured tassels in his back and short boots. He is one of the four almighty animals.

Ochirvaani
He is considered as main object of worship for the Tsam. All of Khuree Tsam 108 characters dance in front of Ochirvaani's biggest sacred portrait. He is the powerful one who obtained all the supernatural powers of burkhans. He was created to calm down the antagonists by burkhan’s command. The mask is made to express magic power with its mouth opened roughly, four poisonous tasks bared, three red eyes shone like lightning, and orange hair disheveled.
He is a powerful object of worship who sworn to defeat the cruel, sinful people who do not respect the religion. He does all of this to lead people to sacrificed charity. He is represented as majestic one with one face, 2 arms and body of dark blue color. He looks very furious with thunderbolt in his right hand. He lifts the thunderbolt up towards heavenly sky and it symbolizes abolishment and defeat of all enemies. With his arm on his chest, it aims to conquer enemies.

Namsrai
He is Choijin sakhius. Namsrai loves all the fine things, and frees impoverished people who are in danger and great hunger. In addition, he eliminates reasons of poisonings and accomplishes every good reasons of living happy. Namsrai does what people want and desire. Namsrai’s mask: Beautiful image with a little curious glance, stately and restive but calm. He wears golden armor and various other treasures. He dances with erdeniin tsogt jantsan in his right hand and a mouse vomiting with treasure in his left hand.

Makhi
Wearing dark blue deel that decorated like other clothes such as tradtional Mongolian boots. Makhi has got bowl and tassel in his hand.

Tsagaan uvgun
Tsagaan uvgun- (White old man) White and spotty deel. Deel without color is like Lamhan’s deel. Boots are made from tiger skin. He has a dragon shaped stick. He is a lord of earth, heaven and livestock.

Gombo sakhius
He is called Makhagal, in Mongolian Ikh khar. Gombo is a guard of Choijin sakhius and next reincarnation of Aryabal Janraisig. He is a god who swore to keep people away from troubles and make them happy. Particularly when people die he brings them directly to paradise. His body is dark bluer. A severe look, rough behaviour, 4 sharp tasks, 3 eyes, curled body and angry face builds his unique appearance. Orange hair tailed, burning fire from eyebrows and beard, wrinkled language, degve in his right hand., bloody skull and bowl in his left hand.

Gongor sakhius
It is called Tsagaan Mahagal (white makhagal) in Mongolian language. He is also called Choijin sakhius, a guard of religion. He abolishes difficulties to make people rich of items and food. He is the heaven of wealth. Gongor’s mask: Body is yellow, white face, with little curious glance and joyful face. Zendmene /erdenenorov/ is in his right hand, and there is a skull bowl filled treasure in his left hand.

Buga (shava)
Buga means deer. He dances with Makhi together and he is responsible for increasing the cattle of people. He is the representative of all animals. In some places Buga dances with a female deer together.