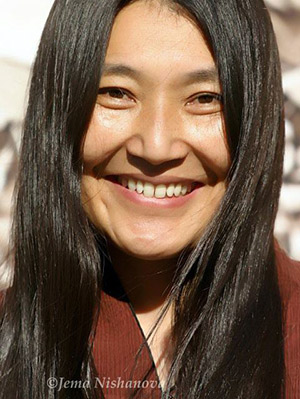 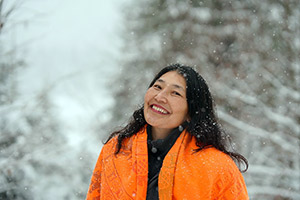 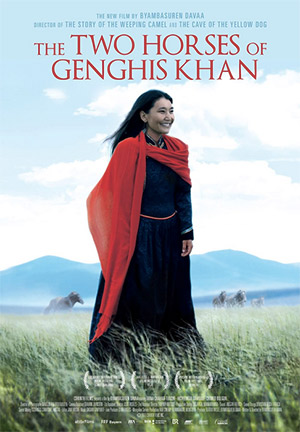 The Two Horses Of Genghis Khan 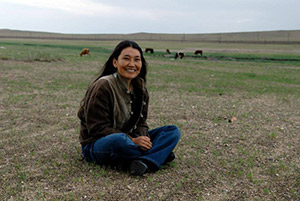 URNA Chahar-Tugchi released her album “SER"–Awakening, recorded with the Polish band Kroke. The album rapidly collected rave reviews and top ratings by music journalists all over the world.

Born into a family of nomadic herders in the Ordos grasslands of Inner Mongolia, 1989 to 1993 she studied the Yangqin (Chinese dulcimer) at the Shanghai Conservatory. Since 1992 URNA has been a Singer on many Concert Hall and Festivals around the world i. a. Metropolitan Museum New York, Concertgebouw Amsterdam, Philharmonic Shanghai, Ulan-Ude, Ordos. Basilica St. Marie del Mar Rome. Tchaikovsky Concert Hall Moscow. Elbphilharmonie Hamburg and Sport Stadium Chengdu ... can be heard and impressed with her strong poetic voice. She rises four octaves with elegance and ease, and her melodic thoughts rise to impressive heights in improvisations.

URNA carries the spirit of her homeland in her music as she performs around the world.

While being rooted in the traditional music of her homeland, URNA continues to take her music to new directions. Her latest compositions emphasize free, brushstroke-like improvisations, which have been inspired by her many years of experienced encounters with other cultures and musicians and her life in the world.

“Her voice remindsme of the whistling of the wind, the cold boldness of the stones and the burning heat of the sun. At once splashing likea waterfall, than tender as the moving wings of a butterfly. That is when youunderstand why Urnás critics and audience say her voiceis like a small orchestra.”– Words from a Swiss critic fell, when he heard URNA performing for the first time.

Blessed with this extraordinary voice, URNA has the abilityto directly communicate with her listeners through her music, transcending all linguistic and cultural barriers with her dynamic, soaring vocals. Her songs evoke the immense grasslands of Mongolia and relate stories about the Mongolian way of life.

URNA has performed with many internationally renowned musicians and her forthcoming CD with the Polish Band Kroke is a shining example of this.

In the summer of 2003, URNA was awarded the Global RUTH Prize in Germany for the best international artist. With her more than two decades musical journey around the world spanning and her many years of collaboration with many international musicians from different cultures from all over the world, she is honored as one of the most important musicians.

URNA is based in Germany, and from there she tours the world since more than two decades.

***
"It is rare for the human voice to encompass themusical range of a small orchestra, and even more rare for the singer atthesame time to remain grounded and not fall into the trap of artifice. Urnaisone of these exceptions. The secret of thisworld class musician consists of acharm influenced by Buddhist philosophy, steeped in tradition and a range ofmelodies which, though earthed in the central Asian steppe, becomeotherworldly."-(FAZ) Frankfurter Allgemeine Zeitung - a leading German newspaper

***
What the press says about the latest album “Ser”:“(...)If you have not had a chance to hear URNA yet, I highly encourage you to take a listen, this album is even more collective with Kroke augmenting her sound and the result is stunning. Though a new name to me, after one listen her sound andvoice are cemented as a lasting impression of artistry. I now am a true fan as well. Highly recommended.”–Bea Willis, 5 Finger Reviews(USA)

Urna Chahar-Tugchi was born into a family of livestock farmers in the grasslands of the Ordos district in the Southwest region of Inner Mongolia. Today Urna is regarded as one of the most outstanding female vocalists of Asia. Based in Bavaria, Germany, Urna continues to carry the spirit of her homeland in her music as she performs around the world.

Urna's developed her musical talent and instincts while learning the Yangqin (Chinese dulcimer) in Hohhot, the capital of Inner Mongolia, with a visiting professor from the Shanghai Conservatory of Music. At the age of eighteen, Urna decided to leave Mongolia to study at the Shanghai Conservatory of Music – an extraordinarily brave decision, for at the time she did not speak one word of Mandarin Chinese and her family knew very little of Shanghai, let alone its location. With this move, Urna's life and career took a dramatic turn.

One Russian music critic named Urna, along with the Tuvan singer Sainkho, one of the "two Asian Divas".  In the summer of 2003, Urna sealed her place as a major contributor to world music in Europe when she was awarded the RUTH prize in Germany for Best International Artist.

Urna is gifted with the ability to genuinely communicate with her listeners through her music, as she transcends all linguistic and cultural barriers with her dynamic, soaring voice. Many of Urna’s songs evoke the immense grasslands of Mongolia and tell of the Mongolian ways of life, and her performances are unforgettable to those who witness or participate in her music. Many describe Urna's singing as akin to the experience of a religious ceremony -- although her music does not necessarily speak of religion, she explains, “I interpret my songs with all my life and energy; therefore, I feel rebirth after each performance.”

While Urna is rooted in the traditional music of her homeland, she continues to take her music in new directions. Her latest compositions emphasize free, brushstroke-like improvisations, which have been inspired by her recent experiences with other cultures and musicians and her life outside of Mongolia.
With this constant yearning to take her music beyond convention, Urna has collaborated with many internationally-renown musicians including the Hungarian violinist Zoltan Lantos, Ramesh Shotham from India, and Muhammud Reza and Saam Schlamminger from Central Asia, and Jerzy Bawol from the Polish band Kroke.

Urna's latest recording, Amilal (Life), is a collaborative effort that features accompaniment from the highly acclaimed Zarb percussion masters from Iran, Djamchid Chemirani and Keyvan Chemirani. Completed in 2004, Amilal is Urna’s personal record of her travels after leaving Mongolia, and portrays her views of the world and human beings, as well as her wish for a peaceful world. Musically, Amilal is a departure from the traditional focus of Urna’s past recordings, which center on the traditional songs, life and memories of her childhood in Mongolia. With the new compositions on this recording, Urna maintains the dignity and the spirit of a Mongolian while embracing a newly-emerging identity as a “world citizen.” Amilal also features Urna’s frequent and close collaborator, violinist Zoltan Lantos. .

Urna has produced seven albums of music on CD:

She is also featured in the film Two Horses of Genghis Khan. 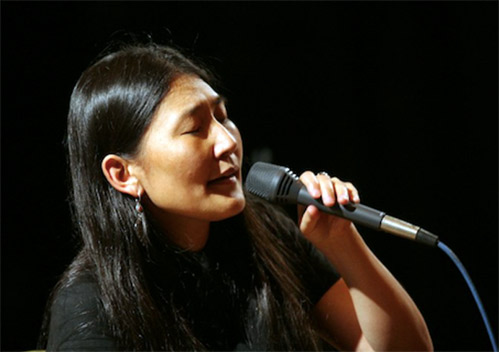